How can leaders effectively navigate differences of opinion and work towards successful negotiations through relationship-building? In this post, Governor Dayton shares his experiences connecting with Minnesotans across the state and working collaboratively with people who did not share his opinions. Governor Dayton also provides some strategies for how to have meaningful conversations in an increasingly diverse, and at times polarized, state. 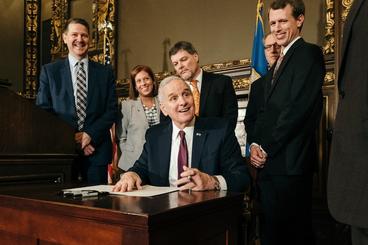 Working through the "Us and Them" Mentality

The advantage of a long campaign is going all over the state and hosting listening sessions. You really get a sense of what's important to people, and you have the opportunity to try out ideas and get feedback, both the pros and cons. You get very different responses when you have people in their natural elements. It's harder to demonize somebody when you're looking them in the eyes, when you find out your kids go to the same school, or maybe play on the same team. I think a key principle of leadership is bringing people together with disparate views and giving them some time and space. It’s also helpful to bring people together in a smaller group where they don’t feel judged.

For example, there’s a perception out there that the metro area is doing better than Greater Minnesota – that the metro is like the rich relative and rural Minnesota is left behind. As long as I’ve been in state government, I’ve seen this perception come forward on issues like transportation: people believe that somebody else is getting the unfair share of transportation dollars. I tried to deal with that in the first four or five years as governor, but the efforts were beaten down because the proposition included a tax increase. If you just compare actual dollars within the objective hierarchy of priorities, yes, the metro area is going to get more.

As a political leader, you can't get anything done by yourself - you have to build a base of support, and that means building and maintaining relationships across differences.

That's really a prime example of the “us and them” mentality where people think, “the metro is getting more, and unfairly.”  That sentiment has always been there, but I think it's exacerbated now because we are just so short of the funds that are needed for what's going on in our state. The trouble at the root of transportation disparities is that we have a chronic shortage of sufficient transportation funds to meet the needs of Minnesotans.

Clearly, in this kind of polarized, “us and them” political climate, you never want to make a policy decision in a vacuum. Politics and governing is a sandbox where you don't get to choose your playmates: you deal with whoever shows up. As a political leader, you can't get anything done by yourself - you have to build a base of support, and that means building and maintaining relationships across differences.

Given these challenges in governing, we used to have commissions all of the time. For example, we had one commission that focused on the housing issues in Minnesota, and we made a real effort to bring in people from different parts of the state and from different racial and ethnic groups. We had a great deal of diversity represented and a number of those people came to the table with a really insightful analysis of the problem.

We then created some action-oriented recommendations, and often we would get legislators in both parties involved with the crafting and implementation of those recommendations. Often these commissions created follow-through in terms of funding allocation, and housing is one of the areas where this approach garnered clear results.

It's so important to build personal relationships that go beyond your ideological differences because that relationship-building is ultimately inherent to democracy and how democracies are meant to work.

I've also seen commissions produce very good results where even though there wasn’t a complete consensus, there was a genuine and overwhelming majority in favor of the proposed action items. There are always one or two that have to dissent or not sign the document for their own political interests or reasons, but there were good ways – especially in the final weeks or days of the legislative session – to try and take some heat off of certain issues, and say, “Okay, until the next legislative session, let's give a group of people a chance to really think about this and talk with one another and see if we can find some common ground.”

As one example, visitation for adult males after separation and divorce was one of the policy questions where people were ready to claw each other's eyes out, so we took the time and set up a commission to discuss the issue and find a path forward. The next session we passed something that the members of the commission all signed onto. So, it's doable.

Compromise as the Path Forward

The biggest surprise for me at times was that intransigence was considered a virtue in politics, and compromise was seen as a failure and weakness. We often saw this with budget negotiations. When you have to try and work out a budget, you really have to agree to things you may not want to. You can always end up with a shouting match or a public confrontation, but that's not always the most effective way to get a resolution – even a resolution that I would want as governor.

Looking back, I can say that there were certainly times when if I had handled an issue better without antagonizing others – difficult as some politicians were to work with – I think our administration could have accomplished more: more of what I wanted and in a more harmonious way that keeps relationships more viable for the next round of negotiations and policymaking.

This goes to show that it is so crucial to get along with one another. It's so important to build personal relationships that go beyond your ideological differences because that relationship-building is ultimately inherent to democracy and how democracies are meant to work. Compromise means you agree to things you don't agree with, but ultimately, that's where you get the results.